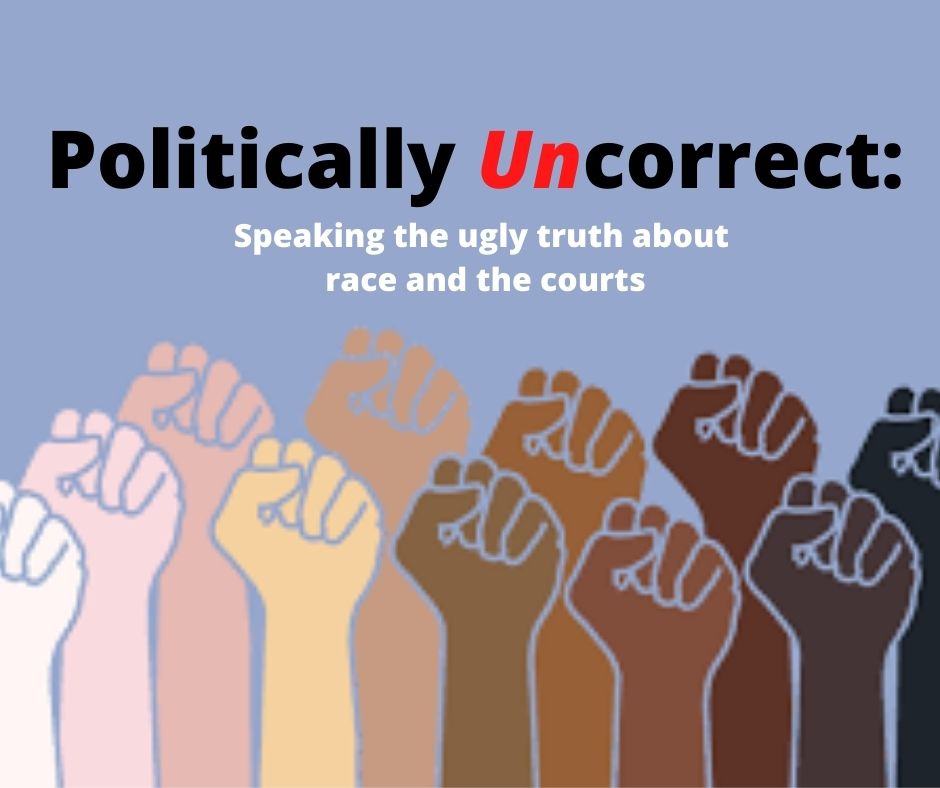 Everything in the criminal justice system is about race.  Everything.

Especially if you live in a major metropolitan area like Chicago, where I live — segregated Chicago, hyper-political Chicago, there’s no escaping the topic.

But, when you are also a Black, female criminal defense attorney, race is the cornerstone of every work conversation. Hell, no matter what race you are, if you work in the criminal courts in any capacity, race comes up every day, in every setting.

If you are one of those folks who says, “I’m colorblind” or “I don’t see race” please, please choose a career in another field.  You’ll never make it here.  We have daily gritty, animated, “off-color” conversations about the color of one’s skin that would be shocking, if not distasteful in corporate America.

So, while executives would be clutching their pearls and calling the EEOC, for years, my Jewish law partner, my Puerto Rican associate, my Mexican office manager, my Black of-counsel, my white lesbian associate and I were all having raw, uncensored dialogues about race, gender, and class multiple times each day.  Before that, my multi-racial, multi-cultural colleagues at the Public Defender’s office and I were doing the exact same thing.

See, criminal defense and civil rights attorneys, aren’t just “pulling the race card.”  The entire deck is colored by race and is usually stacked against anyone who isn’t white:

Black folks are arrested at a higher rate than Whites.

Blacks and Latinx folks are incarcerated at higher rate than Whites.

Blacks get longer sentences than Whites do.

White cops use force against Blacks more often than cops of any other race.

Blacks are more likely to be killed by police. So are Latinx and Indigenous folks.

Most cops are white.

Sheesh, with those stats, how can you not talk about race?

The race of my client, the cop who pulled him over, the judge who is assigned to the case, the race of each prospective juror, are all scrutinized at nauseum by both defense attorneys and prosecutors. Even the race of the attorneys on each side can play a role in the outcome of a case.

As a result, criminal defense attorneys have to get comfortable rather quickly about having uncomfortable conversations about race and gender and class.

We listen to radio calls where little more than race is given as part of the description of a suspect, but every Black man and boy in the vicinity is rounded up as a possible “offender.”

We hear clients tell us that officers called them the n-word, “boy,” the c-word (rhymes with stunt), the b-word, all while conveniently having the sound turned off on their body cams.

We cross-examine white cops who work in gang units in Black or Latinx neighborhoods, where everyone on the unit is not only the same race, but oftentimes hail from the same neighborhood and high school or sports team.

We troll potential jurors’ Instagram accounts to see if they have any friends who aren’t white to speculate whether they can relate at all to our Black or brown client.

We troll arresting officers’ Facebook accounts to find their racist, sexist xenophobic posts peppered with slurs, to confront them with on cross-examination.

We argue with prosecutors after they strike every potential juror of color from the jury pool, leaving behind a politically and racially homogenous venire.

We stand before white judges who have a visceral reaction when they realize that the Black, Latinx, or Middle-Eastern person standing before them is the counsel of record, not the person charged with the crime.

It allows white killer cops to get 2 and 3 year sentences respectively for shooting young, Black men dead in the street.

It allows white serial rapists to serve months instead of years in prison, while men of color charged with non-violent drug cases rot behind bars for decades.

Not only does race matter. Race is oftentimes at the heart of the matter. So, while Lady Justice pretends to be blind, I would be a fool to do the same.