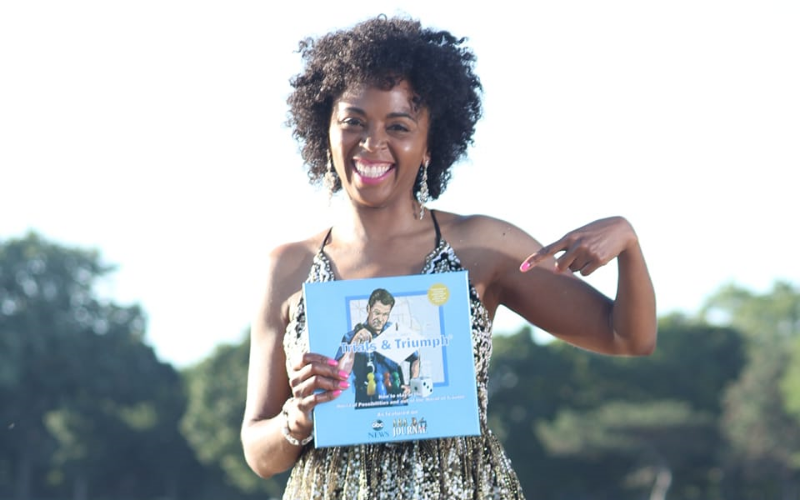 April Preyar ’96, a criminal defense lawyer in private practice in Chicago, was exhausted from helping one client at a time, arguing before a judge and jury, recognizing that 49 percent of Black males and 44 percent of Hispanic males will have been arrested by the time they’re twenty-three.

She videotaped a salty middle-of-the-night rant, urging people to hire a lawyer before talking to police. She recorded weekly videos repeating her message—don’t talk to police, don’t argue, don’t tell them things they don’t already know, call a lawyer. Then she invented Trials & Triumph, a tabletop board game designed to spur conversations to teach young people how to handle stressful police interactions so they can get home safely.

“During a police stop, everybody’s panicked,” Preyar says. “It doesn’t matter what race you are or how old you are. Everybody’s nervous, so imagine how much more uncomfortable it is for a teenager, who’s maybe never been stopped before or is a new driver. I don’t want to inundate people with a bunch of information they won’t remember in that moment of panic. I want them to walk away with strategies.”

She couches those strategies as the seven R’s—don’t run, don’t reach, don’t resist, don’t run your mouth (by answering questions or volunteering information), refuse consent to search, reject a blood alcohol test, and request a lawyer. Or as her company’s T-shirts say, “Shut Up. Lawyer Up.”

The game, released in June 2019, includes more than fifty scenarios drawn from Preyar’s twenty years as a criminal defense lawyer. They’re situations any young person could encounter—group crimes, social-media crimes, fights where something is stolen.

“The difference is, Black and brown teens are more likely to have police contact as a result,” she wrote in an e-mail. “White kids are often given warnings, options outside of the criminal-justice system, or second chances by prosecutors and judges, if it gets that far.”

She targets people of color because they’re more likely to suffer the worst consequences for actions that, if committed by their white peers, receive little or no punishment. “It teaches them to make better choices,” she says.

The game has two tracks, and players can find themselves unexpectedly moving from one to the other. The World of Trouble is the hard-to-escape loop of the criminal-justice system. The only ways out are to land on spaces where your “cop is a no-show” or “NOT GUILTY!”

The game’s other track is called the World of Possibilities, with aspirational successes like “You get accepted into 10 colleges you applied to” and “Buy your 2nd rental property.” Players roll and advance, hoping not to land on the red Flashing Lights spots that require them to draw one of the scenario cards.

One reviewer criticized the randomness of the game; there is nothing a player can do to cause a better outcome. But Jamila Jones, a Spanish teacher and mother of four who lives in Homewood, Illinois, played it with her high-school-age son Darnell and his friends and then with a class of younger students, and she was surprised by how many could relate to the scenarios. Then Darnell was pulled over, and he was able to tell the driver what to do to safely interact with the police officer. “He believes that because of what he learned from April and the game,” she says, “getting pulled over went really smoothly.”

Nico Tynes ’95, a former federal probation officer who now works with iMentor in New Jersey, played the game with fellow adults and said it was eye-opening. “Depending on what music, what movies, what videos young people are watching, that informs their responses in real life, which can be dangerous,” he says. “April’s game shows how one choice can impact the whole trajectory, and that is something that young people think won’t happen to them.”

Preyar was excited to bring the game into classrooms. “The kids put their phones down, they have real conversations, they talk trash about who is going to get to the finish line first,” she says. “Most had no idea of the importance of lawyering up, they all thought to ask their moms, as if they were in the principal’s office, not the police officer’s.”