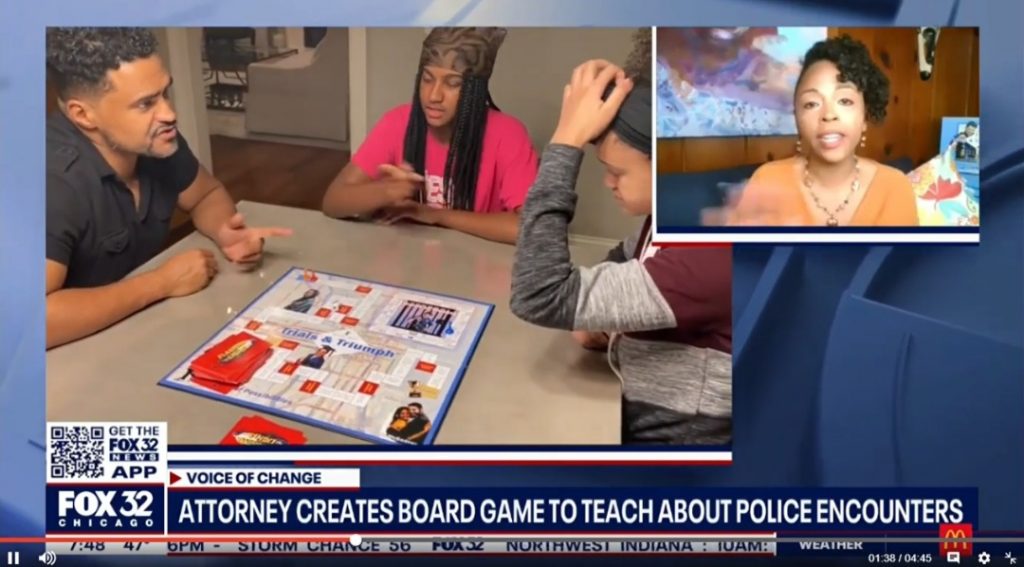 You’ve watched all the movies on streaming platforms and participated in all the viral challenges, but what now? It’s time to unplug with a game night consisting of games made for us by us.

According to Newsweek, only three percent of game developers are African American. Rap Godz founder, Omari Akil speculates that Black board game designers made up less than 12 percent of the 5,000 board games released in 2018.

Although diversity among game developers is low, we’ve done some research and compiled a list of Black games you and your family might enjoy.

Check out these five games created by Black entrepreneurs.

Created by criminal defense attorney, April Preyar, JustUs Junkies’ Trial and Triumph board game aims to teach players how to avoid the pitfalls of the justice system. According to Dangerous Lee, the game features 54 everyday scenarios that one could face in real life such as police encounters, search and seizures, DUIs, and social media crimes.

These cards are hilarious and uniquely celebrate Black culture. Players are asked multiple questions like “When grandma tells you to “rench” it off, what do you need to complete the task?” Answer correctly and you get to keep your Black card. If you don’t, well, it will be revoked.

Immerse yourself into the life of an up and coming rap star on your way to stardom and fame with the Rap Godz game created by Board Game Brothas. As a player, you play cards that improve your rap skills, raise money, and establish street cred as you rise to the top of the rap game. Warning: the game can get messy as players might have to start beef to create some hype.

Life As A Blackman

This board game takes players on a journey that will require you to make life-altering decisions. Players will start as an 18-year-old high school graduate and navigate life by choosing to enter the military, university, Hollywood, or staying in the neighborhood. The game can be played by 2-8 players and is designed for both men and women.

Earl G. Graves, Sr. — founder and publisher of Black Enterprise (BE) — has passed away at 85-years-old.

According to Black Enterprise, his son and BE CEO, Earl “Butch” Graves Jr. said his father

NBA superstar LeBron James has always held his hometown of Akron, Ohio close to his heart and even more so the public elementary school he founded for at-risk youth. Now he’s putting his executive producer hat back on to debut a docuseries that follows the trials and tribulations of the school’s students and its initiative, according to PEOPLE.

His new documentary titled “I PROMISE” is a 15-episode docuseries that tells the story of the I Promise school through James’ perspective as well as the students, teachers, and others close to the institution.

“I think it’s important for us all to see and hear stories that can make each other better,” James told PEOPLE. “That’s why I’m thankful that my SpringHill Entertainment was able to shine a light on these kids and these families, as well as so many other important things they’re doing.”

The school — which opened in the fall of 2018 in partnership with Akron Public Schools and the LeBron James Family Foundation — was designed to provide children with a supportive environment that their home-life didn’t offer. PEOPLE revealed within the first five episodes of the series, third and fourth-graders detail traumatic experiences that people “twice their age” have not gone through.

From imprisoned parents to losing siblings to gun violence, these students needed a place to feel safe and nurtured and the I Promise school provided just that.

“Hope is a very powerful thing. No matter the situation, if a kid knows someone truly believes in them, that changes their outlook on everything,” James said.

As the founder of the Akron school, James wanted to give these kids another chance at success.

“With our school, everything is built on giving kids the confidence that they can do anything,” he said.

The series — premiering on streaming platform Quibi — will go through the daily struggles and challenges as well as show what it means to empower our young people.https://platform.twitter.com/embed/Tweet.html?creatorScreenName=afrotech&dnt=true&embedId=twitter-widget-0&features=eyJ0ZndfZXhwZXJpbWVudHNfY29va2llX2V4cGlyYXRpb24iOnsiYnVja2V0IjoxMjA5NjAwLCJ2ZXJzaW9uIjpudWxsfSwidGZ3X2hvcml6b25fdHdlZXRfZW1iZWRfOTU1NSI6eyJidWNrZXQiOiJodGUiLCJ2ZXJzaW9uIjpudWxsfSwidGZ3X3NrZWxldG9uX2xvYWRpbmdfMTMzOTgiOnsiYnVja2V0IjoiY3RhIiwidmVyc2lvbiI6bnVsbH0sInRmd19zcGFjZV9jYXJkIjp7ImJ1Y2tldCI6Im9mZiIsInZlcnNpb24iOm51bGx9fQ%3D%3D&frame=false&hideCard=false&hideThread=false&id=1237015286181777408&lang=en&origin=https%3A%2F%2Fafrotech.com%2Fgames-created-black-entrepreneurs&sessionId=adac9e0c6c96beaa6054c47b8a7b83f27d31a40c&siteScreenName=afrotech&theme=light&widgetsVersion=2582c61%3A1645036219416&width=550px

“The goal of this school is to have these kids feel like they’re superheroes,” said James.

Viewers will get a chance to see how the school staff works together with students and their families to completely transform the path of their lives.

The show debuted on Monday and will continue uploading the under 10-minute episodes for the next 12 days.

While James has begun construction of a safe housing building for students and families near the learning institution, during this trying time, he is also keeping his promise of serving the underserved.

According to USA TODAY, James and his foundation have partnered with organizations to provide care packages to the students and families of the I Promise School. Plus, the Family Resource Center will keep its doors open and assist with mental health, medical care, clothing, and shelter needs even while school is not in session.READ MORE

What better way to be productive while staying indoors than supporting Black businesses. Books are great to help stimulate your brain and keep your thoughts off the craziness happening in the world. With that said, now is the perfect time to crack open those books collecting dust on your

As minds come together in efforts to develop a vaccine and cure that will put a halt to the pandemic, some insist on contributing their ill and racially immoral two cents. Among the latter are two French doctors who suggest using the people of Africa as COVID-19 vaccine testing subjects.

Professor Jean-Paul Mira, head of the Resuscitation Department at the Cochin Hospital and Professor Camile Locht, the research director at Inserm, both agree that the continent of Africa is the ideal location to test the vaccine.

“If I can be proactive, shouldn’t we do this study in Africa where there are no masks, no treatment, no reanimation,” Mira said in a TRTWorld discussion.

It seems that Mira has neglected to view Africans as people, but instead, as testing dummies who can help the rest of the world be proactive against COVID-19. https://www.youtube.com/embed/Jo4SmnKLQLw?feature=oembed

He continues his demeaning rant by saying “a little bit as is done in some AIDS studies where they used prostitutes to test some things.”

Mira’s statements reek of the historical scientific experimentation on Black people such as in The Tuskegee Study where Black men were used as testing subjects to track the full progression of Syphilis.

During the TRTWorld discussion, Mira also justifies his idea under the claims that the people of Africa “don’t protect themselves,” and his colleague Locht agrees.

“You are right, we are thinking of a parallel study in Africa to use this same kind of approach with the BCG placebos,” Locht said in reference to the Bacillus Calmette–Guérin vaccine used in tuberculosis.

Locht’s approach is all too similar to placebos given to the Black men of the Tuskegee Study who were not treated, but instead given placebos to study the life-threatening symptoms of Syphilis.

Among those outraged by the doctors’ comments are professional African football stars, Didier Drogba and Samuel Eto’o. Each of them took to social media to refute the French doctors.

As scientists, researchers, and frontline medical personnel battle to stop the coronavirus, it seems as if Mira and Locht are more focused on regressing society and tarnishing the advances of medicine with their approach.

Of course, citizens all of the world are counting on the field of medicine to create a vaccine and cure, but this isn’t the way to do it.