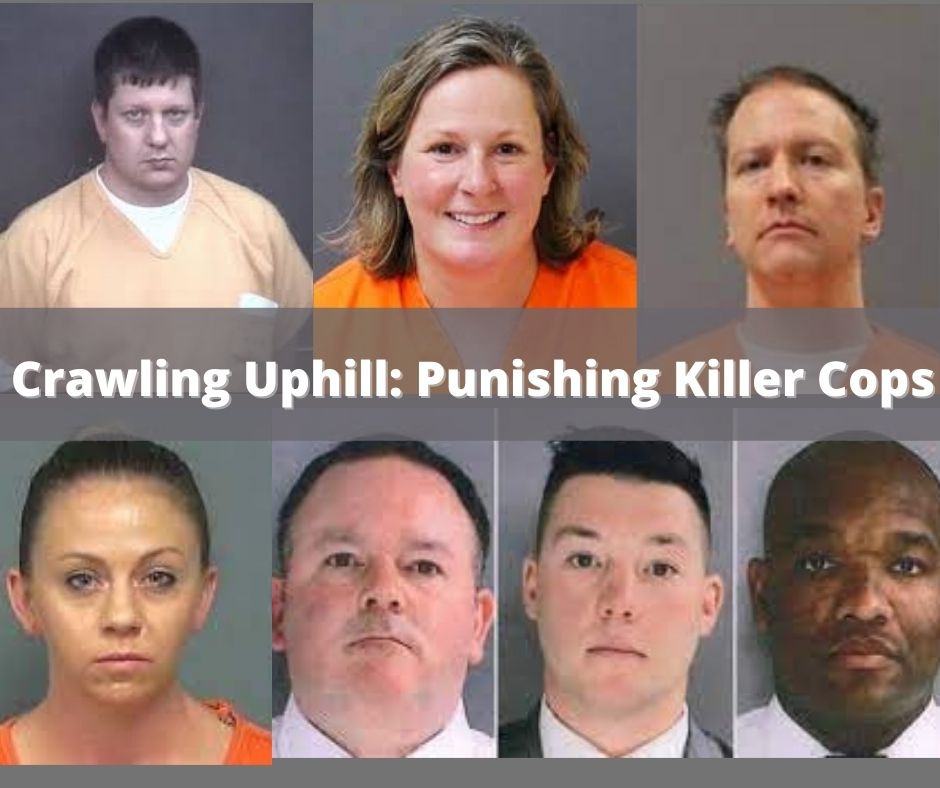 Since Laquan McDonald’s killer only got 3 years in prison for firing 16 times, I knew there was little hope that Daunte Wright’s killer would be behind bars for long for one lethal shot.

Historically, it has always been damn near impossible to have white offenders held to account for any crime against a Black victim. From Emmett Till to Ahmaud Arbery to Laquan McDonald, the entire process of getting from incident to conviction, has been like crawling across the continent on broken glass with needles in our eyes.

If the killer is also a cop, we’re crawling uphill while on fire.

First, we have to protest, boycott, and go to the media, beg, threaten, and cajole, just to get the offender charged. Then, we usually have to settle for manslaughter charges, because the prosecutors didn’t think they could prove up murder. Then we wait months or years to endure a traumatic and painful trial, only for an all-white jury to either acquit or for a non-Black judge to dole out less time than most Black and Latinx defendants get for drug offenses.

Every step of the way, some Black preacher or politician is calling each step “a small victory.”

Miss me with that bullshit.

In 1938, a man named Berry Lawson was arrested in Seattle for loitering – at his own job. He worked in a hotel. Once his shift had ended, he fell asleep in the lobby. Police were called.

Within one hour of him being taken into custody, he was dead.

Officers lied and said he fell down a flight of stairs, when in fact they beat and kicked him to death. The cops even bribed an eye-witness to leave town and not speak to investigators.

The killer cops were fired, arrested and prosecuted by the NAACP. (I’m still not exactly sure how that happened.) They had to post a bond of $5000 a piece at the height of the Great Depression. This would be equivalent to $100,000 today.  They were charged with second degree murder of Mr. Lawson.

At trial, the police officers were convicted of manslaughter and sentenced to 20 years! The officers appealed and the Supreme Court upheld the conviction. This was an unprecedented legal victory at the time. White cops were held accountable for brutally killing a Black man in America!

Great, right? Nope. The governor of Washington state pardoned the officers the next year. All spent just a few months in jail.

Just months after celebrating Chauvin being sentenced to 22.5 years for snuffing out George Floyd life with his knee, in the very same courtroom disgraced former officer Kimberly Potter, received 2 years for a shooting of Daunte Wright. Potter, who is white and female, called the shooting a “horrible mistake,” when she grabbed her firearm instead of her taser and shot Wright to death.

Her sentence requires 16 months in custody, but she already has credit for 58 days. She is likely to serve only 14 real months or less.

Meanwhile, also in Minnesota, Noor, a Somali-American male officer was swiftly convicted of third degree murder and second degree manslaughter for his accidental shooting of a white woman. He was sentenced to 12.5 years. He too called the shooting a “mistake.” He also fired only once.

What about Breonna’s killers? Or little princess, Fanta?

After George Floyd’s murder, over 200 bills were passed across the country to address criminal justice reform in some way. Some deal with use of force, others deal with police training and doing away with qualified immunity.

None of the legislation stops a judge from departing from the sentencing guidelines like we saw in Potter, or outright breaking the law, like we saw in VanDyke (McDonald’s killer) to give a cop a lenient sentence. That is the culture of race, authority and power. That is nearly impossible to legislate.